In October 2021, we ambitiously entered six, 3-car teams in this famous race. Founded in 1951, the event has become the perfect ‘end of term’ race and this year 70 teams entered. During the past 69 years the Birkett has been won by a very impressive list of drivers, there are too many to include here but you can see them by using this link: https://www.750mc.co.uk/formulae/birkett/notable-drivers.htm Uniquely, there are two races going on at the same time in the Birkett. Firstly there is an outright winner but more importantly for most of us there is a handicap race whereby the organisers handicap the faster cars and help the slower cars by giving them a head start, on paper, so that all the cars are meant to end the race all on the same lap! All our team managers gave their drivers a lap time which they had to either beat or maintain in order to make progress in the handicap race.

With the race covering over 500 miles in 160 laps it will be impossible for an idiot like me to provide a lap by lap guide but I’ll try to report the race in my own way.

This year, all our cars had communication between the driver and the crew which proved a great aid to some but there were a few glitches with others, we plan to use these comms throughout next season so we should have it licked by the next Birkett! 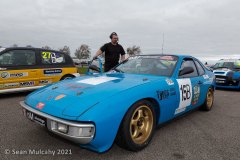 After qualifying Dan was planning to start the race but the starter motor started to short and melt the wire to the alternator so a small fire in the car was the first bit of fireworks in the race. Fortunately, as always, the next driver, Pete was ready to take Dan’s place while Fudge, Clive and team replaced the starter and wire in time to take the 3rd stint after Matt took the second stint. Each stint was 60 minutes or thereabouts and after 2 hours the team was in 3rd position in the scratch race. Following a stop and go penalty the team slipped down the order but by the end of 6 hours racing they had made it to 14th position and won the All Porsche team trophy presented by the 750 club. For 99% of the team, this was their first attempt at an endurance race so a great outcome and pleanty to build on for 2022.

Manager Ann Hardy of Verum Builders: Jamie Callender (Boxster S), Rob Hardy (Boxster S) & Sami Bowler (Mini Cooper S). I know it’s not a Porsche but we had a withrawal at the last minute so Sami kindly stepped up and did a great job in her Mini.

Jamie had all sorts of car issues leading up to the start but with a great team effort all was resolved so Jamie could make the rolling start and after his stint the team were 30st in the scratch race. Rob went next in his Boxster and dragged the team up to 29th! Next up was Sami in her rapid Mini after a stunning 55 minutes she maintained her pace throughout to a 34th position. After 4 hours they were up to 21st place and by 5 hours they had slipped to 25th place. By this time Rob’s beautiful Boxster S with a new engine and gearbox had a mechanical problem with the new clutch so he had to stand down and leave it to Jamie and Sami. They ended up at the end of 6 hours and 136 laps in 17th place. A great achievement by this team effort.

Team 35 CAP Dads and their Lads 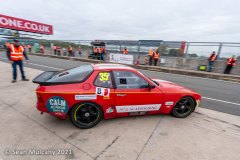 Jamie’s turbo failed to show due to teething problems, he says it’s beautiful but no one has seen it yet as the car has had a few issues all year. So, we were down to 2 cars and four drivers to start the race in 45th position. Dan was first off for his 1 hour stint, his car is a fantastic example of a 968 race car and won our best turned out prize for the Charles Ivey Cars prepared machine. After the first hour they were in 14th position and in 7th place after 2 hours- fantastic!

They had dropped to 31st at the end of 3 hours but came back to 22nd after 4 hours. 5 hours saw the team slip a little to 28th and at the end of the race 43rd place was their eventual finishing spot. This from Manager Geoff ‘Just as we were congratulating ourselves on a smooth no issues race…

Al and Dan’s 968 broke its gear linkage just as it was going out for the final stint – so Jamie changed back into his driving suit and did the final stint in the 944! The ‘quick change’ including adding a couple of litres of oil to the engine lost us only 7 minutes’ That is a massive effort by a two car team whose combined age was over 190 years! Great job, now if only Jamie can get his turbo to work????? 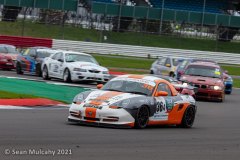 This was a very strong line up and proved to be so in the race. Adam is a PDA Champion, Ed and Andy are super quick and experienced Porsche racers. They qualified fastest of all our teams in 23rd place. Adam was off first and was up to 9th by hour 1, position. Unfortunately, a 60 second stop and go penalty in hour 3 slipped them down to 34th .Andy and Ed and Adam poured on the pressure with great lap times and by hour number 5 they were back up to 17th , they made up another place by the end of 6 hours so ended the race in 16th place, just two positions behind the SW Engineering car. The 60 seconds stop go was the killer so the win is there to be had next year. 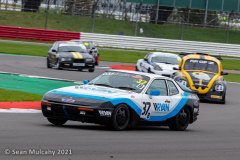 With the race start imminent, things looked dicey with only one car 100% healthy. Both 968s had problems: the Egar / Birkett car suffering from an oil leak, while the Sampson car had a defective CV joint which would need replacing before the race. Thus it was down to Ryan Mone to start the race in his 944S2, tasked with staying out as long as possible to buy some time for the other cars to be fixed.

His opening stint was a rapid and consistent 1.5 hours, which put the team into 4th position on handicap, and climbing from 50th on the grid to 25th overall. Ryan won the CAP Driver of the Day trophy for his efforts. Meanwhile the Egar/Birkett car was declared fit to race, and the Sampson family found not one but three replacement CV joints after scouring the Midlands, one being installed for a grateful Clayton by Clive Morison and John Jones.

The second and third stints were taken by Lee and Clayton, both drivers lapping consistently and with good pace to keep the team well up in the handicap.

Clayton handed over to the rapid Jack Egar who was having a great drive until it unravelled when he received a stop-go penalty for a yellow flag incident. There was some confusion in communicating this to the driver, compounded at the driver change. When the dust had settled, the team lost 9 minutes and any chance of a high finish.

The race was concluded by Ed Sampson and Adam Egar who clawed back some of the lost time, the team finally finishing 29th on handicap and 5th CAP team.

Also big thanks to Darren Constant and Richard Brown for their efforts on the pit wall.

Team 38 The Archers with CAP 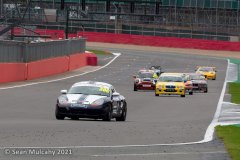 Last but not least this is another very strong team of cars and drivers. Angus is Porsche club winner and owner of AMS specialist cars, Gary Goodwin is a prolific PDA and CAP racer, Stephen & Felix are both CAP & intermarque regulars back in the day. Starting in 29th on the grid they got off to a good start and by the end of the first hour were up to 16th on the handicap. This team was the most consistent and reliable group and made steady progress and by lap 114 they were still in 17th place which was really good going if you compare them to all our other teams, there were by far the most consistent. By the end of 6 hours the boys ended up in a very creditable 28th position and claimed the third place trophy in our inter Porsche team race. Next year this experience will stand them in good stead and make a formidable team.

View a gallery of the best of Sean Mulcahy’s photos.