Just three weeks since our last race and we swapped the wall-to-wall sunshine of Snetterton for a wet and windy Silverstone International Circuit where we were once again sharing the track with the eclectic mix that is the Bernie’s V8 grid. There was a full entry of Porsches, featuring a mix of newcomers and established competitors, joining an equally large V8 field.

Our ranks continue to grow and this time, the newcomers included:

Sadly the ever present Jack Egar/Lee Birkett 968 was a last minute withdrawal as they had been unable to fix Snetterton’s gearbox problems in time for this meeting.

Started off with a wet track, which got drier as the session progressed. The 42-car field made for a spectacular sight as they struggled for traction on the slippery surface.

The initial pace was made by the Porsches with Adam Southgate’s SPDA Boxster swapping fastest overall time with James Coleman’s crisp sounding SP1 Cayman, followed by Paul Simpson’s SP2 Boxster. However, as the session progressed and the track dried, the V8s came to the fore, the leading cars using their power advantage on the long straights to set times out of reach of the more nimble Porsches.

As the 20 minute session ended, quickest Porsche was Adam Southgate in an excellent 3rd overall just 0.6 seconds ahead of the Coleman Cayman. Next up was the class leading SP2 Boxster shared by Angus Archer and his Uncle Stephen, a highly creditable 7th overall, just ahead of 4 more closely matched Porsches: the rapid Harvey/Hall Boxster, the SP3 class-leading 944 of Thomas and Jamie McHugh, the Kyle-Henney/Lewis Boxster and Paul Simpson’s similar car.

Further back the SP4 class was headed by the Karl Rossin/Sam Callaghan 924 revelling in the conditions in a highly creditable 26th overall ahead of many more powerful cars and over 2 seconds clear of the next up 924 of Andy Pritchard who was sharing his car with Silverstone local Gary Campbell. 924 returnee Richard Jones had a couple of lurid spins as he struggled with an uncompetitive suspension set up, lining up at the tail of the field, but still quicker than the massive Ford Galaxie alongside him on the grid.

On a track that stayed dry throughout, James Coleman took the outright race lead after one lap, dropping a couple of places subsequently as the more powerful V8s got into their stride. James and Adam Southgate then battled for the Porsche lead, staying together near the front of the overall field until the mandatory pit stop. After that, the cars lost touch with each other, and Adam took a comfortable Porsche win and 3rd overall, officially over a lap ahead of the next Porsche. He was ahead of James Coleman on the same lap, but a timing transponder glitch meant that James’s finishing position was shown as a lap behind.

The Archer/Archer Boxster finished a few seconds ahead of the Kyle-Henney/Lewis Boxster to take the SP2 win, and in an excellent 10th overall.

The McHugh family SP3 944 was next up after an eventful weekend which included an accidental coming together with a V8 at Vale on the first lap, but thereafter circulating quickly to finish a lap ahead of the second placed SP3 car of Clayton and Ed Sampson who found a good race pace 5 seconds quicker than in qualifying. Second place in SPDA was taken comfortably by the new Harvey/Hall Boxster continuing their impressive CALM debut a lap ahead of final SPDA runner Andy Baker.

Karl Rossin/Sam Callaghan were clear winners of SP4 ahead of the Pritchard/Campbell car with Chris Valentine/Ant Sahota making up the podium in 3rd place – Ant’s first ever pot from his first ever race at Silverstone.

The Driver of the Day award went to James Coleman.

Ryan’s Best Mate was awarded to Lee Ketts, who helped out Andy Baker on Friday, despite having a broken leg.

The Best Turned Out Car award went to the Blue Archer/Archer Boxster.

Our next outing promises to be something special with a stand-alone race at the prestigious Porsche Festival held at Brands Hatch on September 5th. We are expecting a capacity grid in front of one of club motorsport’s largest crowds of the year. 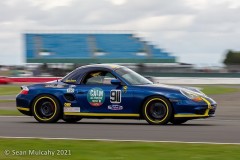 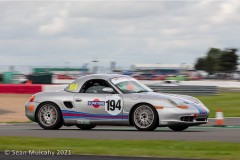 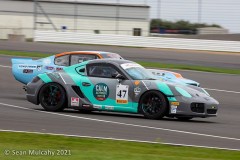 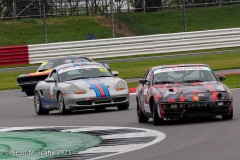 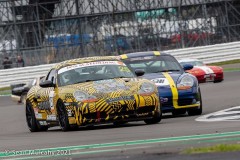 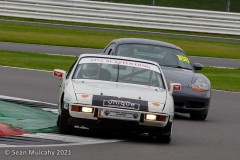 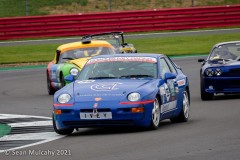 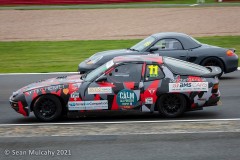 1 2 3 ►
Sean’s full photo gallery can be viewed on Flickr. Full results and time sheets are available on the 750MC website