It was a VERY hot weekend, with glorious sunshine throughout and temperatures into the 30s. The downside was that this made 40 minutes of racing pretty uncomfortable for many, and the paddock was full of teams trying to get more cooling air into the cockpit.

A twenty-car car entry – half of whom were shared cars (this format proving increasingly attractive to CAP entries – were joined by an impressive 8 newcomers to the series:

All cars were present and correct for qualifying which was a mere 20 minutes long; with a lap time well over 2 minutes, this meant that most of the 2-driver teams only managed the bare minimum of 3 laps per driver required and those who hadn’t raced at Snetterton before spent most of the time learning the lines and circuit layout rather than going for quick times. Fortunately there were no red flags!

Pole was taken by the rapid and very crisp-sounding James Coleman’s Cayman, although Adam Southgate sharing the front row in his SPDA Boxster was only fractionally slower. Jonathan Evans & Toby Barlow were 3rd, suffering a lack of power from an exhaust damaged earlier in the season, which was a real handicap on the long Snetterton straights. The next few places were taken by closely bunched SP2 Boxsters led by Matt Kyle Henney from the Walker & Walker car and Angus Archer & Adam Bird.

Quickest SP3 was the impressive Daniel Crego, who was making his Snetterton debut in only his 3rd ever race outing. Further back the usually rapid Adan Egar & Lee Birkett 968 was hampered by gear selection issues and hoping that an oil top up would see them through the race. Quickest SP4 was the Rossin & Callaghan 924 ahead of the Valentine & Sahota car, with “Ant” setting the time – an impressive feat on his race debut, although co-driver Valentine was so badly affected by the heat that he opted not to take part in the race.

The standing start was clean apart from Dan Crego finding himself stationary in his 944 having not selected first gear, which was collected by Andy Pritchards’s 924 resulting in a somewhat modified badge panel. Andy was flagged in for gaffer tape styling and re-joined. Ant pitted his 924 but it was soon apparent the engine was boiling over and after 7 laps of his very first race was forced into retirement.

The front three of Coleman, Southgate and Evans settled into lapping with around 15 seconds between each but then came a gaggle of battling Boxsters: Jon Walker, Matthew Kyle-Henny, the Stephen & Felix Archer car, then the “other” Archer, Angus. Garry Goodwin’s car suffered front splitter damage and whilst he was able to circulate for several laps making interesting noises, he dropped down the order after a pit visit for more gaffer tape.

At the flag the overall winner was the SP1 Cayman of James Coleman with a comfortable 18 second victory – his first win with us. Second overall was Adam Southgate, once again taking the SPDA class win. Jonathan Evans took second in SP1 and 3rd overall, gaining fastest lap along the way; he’d managed to get his defective exhaust very kindly welded and his car was much healthier than it had been in qualifying.

SP2 was won by Matt Kyle-Henney on the road, but he was later penalised 40 seconds for a short pit stop, promoting the father and son Jon & Christian Walker’s Boxster to the class win. Stephen Archer sharing with Felix were an excellent 3rd in Sp2, and their day was crowned both by winning the award for Best Turned Out Car and beating brother Angus in 6th and 7th overall respectively.

Rob Hardy took a good SP3 win in his 944 from novice Dan Crego in his 968, who was also awarded the Driver of the Day.

There was some close mid-field racing too including a heat-exhausted Clayton Sampson taking 10th overall by just 2 seconds from the considerably quicker Colin Tester & Perry Darling Boxster.

Karl Rossin & Sam Callaghan took a comfortable SP4 win after racing neck-and-neck with debutant Anthony Sahota until his retirement from an overheated 924; despite this the debutant managed to set class fastest lap. As a result, the slightly battered Andy Pritchard picked up 2nd with Darren Constant third. Darren also won “Ryan’s Best Mate” for both volunteering to marshal (along with Christian Walker) on the Saturday and the extraordinary efforts he put into getting his car in race condition after a 4-year gap.

The full results from this race are on the 750MC website. 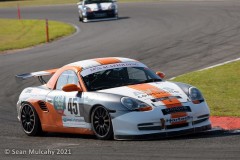 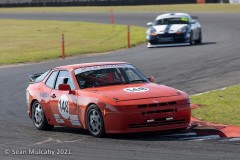 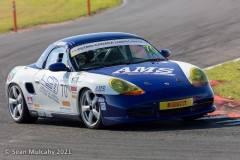 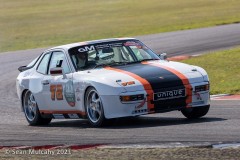 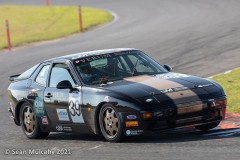 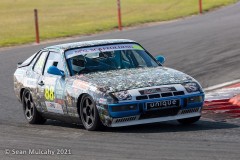 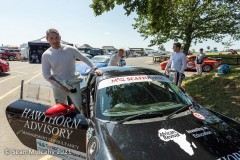 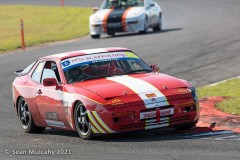